One Family’s Story of Mental Illness and What Came After

NO ONE CARES ABOUT CRAZY PEOPLE
The Chaos and Heartbreak of Mental Health in America
By Ron Powers
360 pp. Hachette Books. $28.

In the opening chapter of his extraordinary and courageous book, the author and critic Ron Powers writes about a recurring dream in which he imagines his sanity as resting atop “a thin and fragile membrane that can easily be ripped open, plunging me into the abyss of madness, where I join the tumbling souls whose membranes have likewise been pierced over the ages.” The “horror and helplessness of the fall,” he goes on, “are intensified by an uncaring world.”

In “No One Cares About Crazy People,” he joins those tumbling souls, two of whom are his beloved schizophrenic sons. He writes with fierce hope and fierce purpose to persuade the world to pay attention.

No doubt if everyone were to read this book, the world would change. But its clumsy title (taken from a stunningly cruel offhand remark by one of Scott Walker’s staffers) is painfully correct. The mentally ill are still viewed with fear or suspicion, as broken, as damaged goods or objects of pity. Still, Powers will surely help to correct that perspective; it’s impossible to read his book without being overcome by empathy for his family, respect for his two beleaguered boys and, by the end, faith in the resilience of the human heart.

Powers, whose books include an acclaimed biography of Mark Twain and, with James Bradley, “Flags of Our Fathers,” is a deft craftsman of sweeping tours of history but also intensely personal human narratives. He brings all his talents to bear in this account of his literature-loving, endearingly goofy, high-achieving family’s descent into hell. Powers, his college-professor wife, Honoree, and their children had a beautiful life in Middlebury, Vt., until their younger son, Kevin, a gifted musician, began to exhibit symptoms of schizophrenia at age 17. Three years later, in 2005, he took his own life. Dean, the Powerses’ elder son, also developed the disease but eventually found some stability and a productive life through vigilant, compassionate care. In the boys’ letters and emails to their parents, elegantly threaded through the book, you can hear the voice of a family holding tight to one another and frantically expressing love as a shield against an onslaught of pain. I’m not sure I’ve ever read anything that handles the decline of one’s children with such openness and searing, stumbling honesty. This sort of truth-telling is particularly difficult inside a family, where fictions are often deeply baked and compounded by what they have invented (or ignored) to survive tragedy. And this candor is always serving a larger purpose: “to arm other families with a sense of urgency that perhaps came to us too late,” Powers writes. “When symptoms occur in a loved one, assume the worst until a professional convinces you otherwise. Act quickly, and keep acting. If necessary, act to the limit of your means. Tough advice. Tough world.” 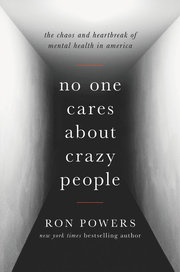 Powers’s stated objective, and one that he brilliantly fulfills, is “to persuade my fellow citizens in the Schizophrenic Nation that their ordeals, while awful, are neither unique to them nor the occasion for shame and withdrawal,” and “to demonstrate to those who fear and loathe ‘crazy people’ that these victims are not typically dangerous, weak or immoral, or in any other way undeserving of full personhood.” But he is less successful in his second goal: to call for America to “turn its immense resources and energy and conciliatory good will to a final assault on mental illness.” In doing so, he creates what feels like two books, alternating his family’s story with a densely reported, sometimes dizzying survey of mental illness through history, from 1403, when London’s notorious Bethlehem “Bedlam” Hospital first began accepting “lunaticks.” He shows how major leaps in science and innovation have found twisted applications in the care and treatment of the mentally ill — Darwin’s theories of evolution become the basis of Nazi eugenics; pharmaceutical companies promoted “wonder drugs,” freely exaggerating claims, playing down dangerous side effects and unjustifiably inflating prices. These are mainly horror stories, broken by the occasional crusader-heroes like Dorothea Dix, who fought for the establishment of America’s first mental hospitals in the 19th century.

More often, even the best intentions have had disastrous consequences. In the 1960s the deinstitutionalization movement shifted patients from large, crowded psychiatric hospitals to what was viewed as more effective and humane community settings. Today there are some 10 million Americans with mental illness and only 45,000 inpatient psychiatric beds, leaving the suffering to shuffle between “crisis hospitalization, homelessness and incarceration.” Jails and prisons are now the nation’s largest mental health care facilities. The worst data point: There are 38,000 suicides a year in this country, and 90 percent of the victims are mentally ill.

Midway through, the book fuses into a powerful coherence. Sweeping exposition and finely grained narrative weave together, as confusion, pain and uncertainty emerge in the Powers home. An email from Dean, in college in Colorado, about a football game — “I think that game was fixed, and probably by the government” — strikes Powers as odd. Dean’s behavior becomes erratic. His father blames drugs or alcohol.

Meanwhile, Kevin, studying at the Berklee College of Music, is increasingly anxious. Powers chalks it up to adolescence until Kevin calls at 4 a.m., giddy with the news that he has been selected to go on a concert tour of Russia. His parents try to make sense of it. “Such is the power of persuasion, or the need to believe, or something, that we tried to fit his announcement into some plausible context,” Powers writes. “He was pretty damn good, after all. Had he made it through an all-night winnowing process of deserving students?” When Kevin reports a few hours later that he’s boarded a Greyhound for Los Angeles, where he expects to be a rock star, they race from Vermont to intercept his bus. But they find that he had already been removed by a police officer and delivered to a hospital emergency room in Syracuse, where he was sedated. The doctor suspected bipolar disorder, which, he said, “was a better diagnosis ‘than the alternative,’ ” Powers writes. “Yet, uninitiated as we were, we thought that perhaps we knew.”

They learn, as does the uninitiated reader, how the mentally ill retain their humanity, with all its hues, through the perils of the damned, in and out of emergency rooms, chased by police officers, from one good day back into the abyss. Powers and Honoree do what all parents do. They fight right until the end, when they find their son’s body. Then they fight, with added ardor, to save their other son.

Dean also attempts suicide — but is rescued in time. He finds the right doctor, the right medicine, the right dose. He walks again in sunlight. Is he different, from peak to valley? Not in his essence, or in his bond with his brother, which animates the book. “I am grateful for the almost 21 years I was given with Kevin,” Dean writes in a letter to a local newspaper after his brother’s death. “And after God takes back a gift like Kevin, it is a small request to ask Him for enough hope and strength to endure the grief.”

Like many families that have struggled with mental illness, the Powerses have seen way beyond their reasonable share of darkness, but they do eventually find a kind of hope and strength. This brave book — which reads like the act of consecration it is — imparts both, and demands society do the same for all who struggle.